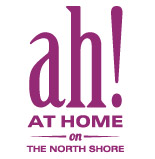 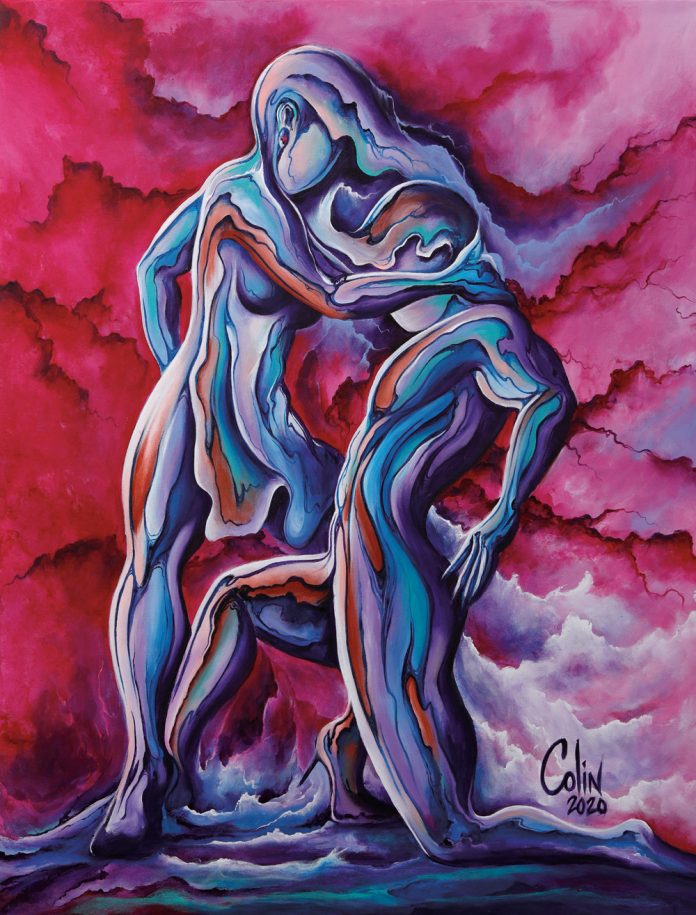 Colin Cook’s self-proclaimed “Fluid Form” paintings are capturing the imagination of local art buyers. His abstract approach depicting human bodies twisting themselves into the earth like the roots of a tree can create swirls of emotions. The shapes are paradoxically strong and sinewy with a serene softness that brings the dynamics of the human relationship into harmony suggesting a dance with the elements of our existence.
Fire, water, earth and air all came alive without intention when Colin approached his first experiments with acrylic paints. But he is starting to see where so many of his life’s passions are now culminating in this body of work.
Always drawn to the human physique, Colin portrays his figures with strong musculature and control of their movement.
“A lot of people will look at my paintings and think they are very sexy and sensual. I guess they really are but what I see or what happens when I start to paint is a dance between two people. When I look at these paintings I feel happy. When people are dancing they usually are happy,” says Colin.
The dance between the faceless figures is also a conduit to the energy that Colin brings into the painting and what he hopes to be released. This is an aspect that he is trying to give a little more attention to without getting too invested and interrupting the flow state he falls into when he is working on a piece.
“To be honest I really don’t know where the painting will go when I start. It’s hard to explain but I don’t pay too much attention to what I am doing at the time. I sometimes move around a lot and I get my fingers into the paint as much as I use my brushes,” he says. “I am afraid that if I think about it too much that I might lose it.”

Art has been part of Colin’s raison d’être since he was young. As a student he was encouraged by his teachers to embrace his talents and follow his dreams. He attended the Nova Scotia College of Art and Design and at that time he was told that figure painting was not his forte. It has taken several decades for Colin to return to this type of artistic pursuit. He is a trained graphic artist and has worked in numerous mediums over the years but most of this concentration has been for employment or what seemed like work. This current process has been more self-fulfilling and he is enjoying every moment.
It has only been a little more than a year since Colin started to work with acrylics. He says he was inspired by his cousin Dan Munroe, a well-known artist with a large catalogue of work and loyal following. “Danny encouraged me to give it a try. I took a look at some of his more abstract paintings and I thought why not see where I can take this.”
Last fall Colin had his first solo show in New Glasgow. He had more than 50 pieces in the exhibit and sold most of them.
“I am amazed at the people who are interested in my art,” says Colin. “I thought there would be a specific type of person that would be drawn to this subject material, but it seems to have a wide appeal.”
Colin will paint for several hours each night. Since his show he has had a stream of commissioned work with requests for specific colour tones and genders in the paintings. He recently finished a piece where a patron requested a face on the figure and he experimented with adding a dress to a female form, a departure from the nudes that have been the custom so far.
The choreographed language in Colin’s artwork moves with his treatment of vibrant colour. Force fields of fire and lightening are the stage on which his figures dance. He uses light and darker shades finding the definition in the human forms and the vibrancy in the tones emanate the energy and emotion he believes are channeled into the room. He is exploring ideas where he moves this theme into three-dimensional art pieces to push the boundaries of his own artistic comfort zone.
As organically as he says his paintings evolve so does Colin’s own growth as an artist. Looking inward he says he cannot completely define it but as things change in his own life the theme of movement is at the heart of Colin’s paintings.
“All I know is that, in the end, I want to create something beautiful.”

Turning to the Past 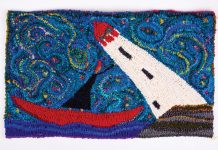 The painter, the sculptor and the rug hooker 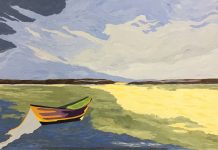 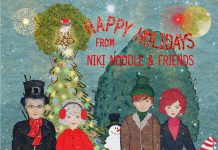 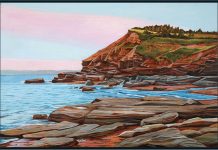 From design ideas to food and wine, health and fitness to art and culture you will find it all AT HOME.
Contact us: crystalmurray@advocateprinting.com
© Advocate Print & Publishing
Do NOT follow this link or you will be banned from the site!
MORE STORIES