Andrew Parsons and Shauna Heighton try to tread lightly on the earth. Together they have been mindful of making an impact in their fields of work and community but making conscious decisions to lessen their impact on the environment. When one of those decisions was to change their postal code it opened up a world of opportunity to build a home that really captures their ideals. From the sketches they made sitting at the kitchen table in their century-old home in Scotsburn three years ago to standing around the kitchen island in their new home at Melmerby Beach under the canopy of timbers felled from their old backyard. The couple are just starting to bring the scope of their project into focus after a year that, to them, seemed to go by in a blur.

Despite the feelings of living in the chaos of building, a temporary move and several months living in their travel trailer with two teenage daughters and a dog, there has been a systematic model beyond the usual foundation wall-and-roof approach to most builds.
The sweat equity of building ones home on their own is enough to separate the chaff from the wheat. Then layer on the precision and craftsmanship that is the hallmark of timber frame construction while incorporating the modern technologies that maximize energy efficiency and you have yourself a real project.

Before Andrew’s carpenter pencil hit the papers to begin working on the design of the house the couple knew that their ultimate goal was to build a structure that would very quickly reduce their carbon footprint. This would be no easy feat considering construction is one of the biggest offenders when it comes to green house gas emissions. As an Industrial Arts teacher Andrew naturally adopted an academic approach and took several courses in the U.S. to learn about passive house and timber frame design. The knowledge enabled Andrew to take on the bulk of the design and labour and significantly scale back on the overall costs. While they are still wrapping up a few of the more aesthetic aspects on the build they feel confident that they have achieved what they have set out do and this fall the family will be moving into their 3,600-square-foot home that someone recently joked, “will be able to be heated with a candle.”

Ultimately, that’s the goal of a passive house. If you situate your house so that it takes advantage of the sun in the winter and shade in the summer, use proper insulation products and techniques, eliminating as many air leaks from the house as possible, make sure that there are no thermal bridges (pathways for the heat to escape from your dwelling), double and in some case triple pane windows you really should have very little need to draw energy from the grid. In fact, proponents of passive house design will say that a certified passive house will use 90% less energy that the average home uses and the other 10 % will come from your own body heat, appliances and the sun.

Last winter when the winds of the Northumberland Strait whipped through the trusses and unfinished walls you would never have guessed that the house they have built could be as airtight as it is today.

“In a certified passive house the airtightness of the house is 0.6 air exchanges per hour. According to Efficiency Nova Scotia, a home of this size with a good rating would have 2.5 air exchanges per hour. I was hoping to get to 1.0 but we got to 0.45 which actually exceeds the air tightness of a passive house but we did this without spending a lot on exotic materials and we really didn’t do anything to unusual,” says Andrew.

Approaching the house as a system Andrew wanted to create a co-dependent relationship between design, insulation and mechanical operations. It took a while for them to decide where the dwelling should rest on the little knoll overlooking the back bay of Melmerby Beach. The direction of the sun changes with the seasons, they wanted to ensure that they maximized the solar gain in the winter without too much compromise to their view. This meant many site visits for an entire year before the build to make sure that they got it right. The walls of the house were also framed with 2×8 timbers creating a deep cavity for extra insulation. In his research, Andrew discovered a product made from waste rock that is produced by melting the rock and spinning it in to fibres. The result is an insulating material that Andrew says has excellent thermal properties but is also a buffer for temperature fluctuations. It is an inorganic material that cannot promote the growth of moulds with the added benefits of noise reduction and fire protection. Their home was one of the first in Nova Scotia to use the Roxul brand. From there, the exterior of the house was wrapped in a layer of foam, the roof construction allowed for three layers and every joint and seam was taped.

“When you are producing a really energy efficient envelope for the entire house you want to make sure that you have very few penetrations in the structure where you can let heat leak contributing to that carbon foot print,” says Andrew. Where penetrations to the structure were required for services Andrew made the openings as small as possible and ensured that they were well sealed.

Heating water for home dwellers is one of the biggest draws on energy. To help mitigate the energy requirements for water heating Andrew installed drain water recovery systems that will take the heat out of the kitchen and main bathroom shower waste water and preheat the water that then goes into the boiler. This means that it will require less energy to bring the water in the boiler up to temperature. The makers of the Drain Water Recovery system and homeowners using the system purport that installation drain water recovery in a new or existing home can result in significant savings.

Thinking of the house as a system and as a living entity means that it’s going to need to breath. All houses have different degrees of ventilation. The tighter the house the more you are going to have to manage the moisture level. Older homes, traditionally less energy efficient and less airtight provide their own ventilation and moisture balance. Newer and tighter builds need a system to maintain the proper moisture balance. Andrew and Shauna chose an Energy Recovery Ventilation system that will not only keep the moisture balance when there is more cold, dry air in the winter (very important when you live in a house made from timbers) but remove the moisture in hot, humid weather. The systems are also calibrated so when air passes each other in the ventilation system they do not mix but there is a heat transfer that keeps the air temperature at an optimal level of comfort.

When all of these elements have been achieved most homeowners appreciate a few metrics to demonstrate how the systems will perform. Shauna and Andrew had several performance tests by Efficiency Nova Scotia and the Home Energy Rating System (HERS). While the structure is not a certified passive house by incorporating some of the fundamental principals of passive house design Andrew and Shauna could boast, if they were inclined that way, that they have an energy efficient home that is 55% Better Than Code for a house built in our climate zone. The Better Than Code rating was established in Ontario and is slowly making its way east (at the time of print one other home in Nova Scotia had a HERS rating and is a bench mark for home builders who want to advance beyond current energy efficiency programs to take the next step to sustainability. In addition to the percentage of increased efficiency the program also offers builders and homeowners a home energy rating known as the HERS index. It’s likely the only test that Andrew and Shauna have taken in their lifetime where they were happy to see a low score. With a HERS index of 36 their house has been entered in the 2018 Cross Border Builder Challenge that celebrates excellence in energy-efficient home building.

Andrew and Shauna were introduced to this new measurement in the building world by Andrew’s cousins John Godden. John, who spends a part of his summer in Chance Harbour, Pictou County, is the founder of the Ontario-based firm Clearsphere that puts the Better Than Code stamp on new builds as well as consulting and constructing custom, eco-friendly, ultra energy-efficient homes incorporating the latest green technologies and products.

Andrew and Shauna’s home will not be completely isolated from the use of energy generated by fossil fuels. They decided to heat their radiant floors with propane, although a fossil fuel, it releases 45% less CO2 emissions than if they were using coal to produce electricity. “By utilizing LED lighting and Energy Star appliances and relying on propane to fuel as many of our appliances’ as possible, we have reduced the electrical needs of our house,” says Andrew. Typically, a house of this size would have a 200-400 amp capacity and currently the house is comfortably running on just 70 amps.

“We also have made room in our mechanical to incorporate more solar energy as those technologies become more affordable,” says Shauna.

Passive energy applications can be incorporated into the most modern building designs and in the largest of cities. Shauna and Andrew have a home that relates to the environment with a clear view of the natural world that surrounds them, held up by the storied timbers that came from the woods in Scotsburn Pictou County and leaves little behind other than a breath of fresh air when it comes to rethinking about the ways we can build our homes. 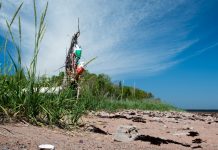 The Treasures of Munroes Island 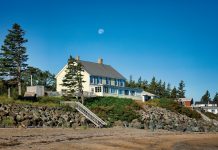 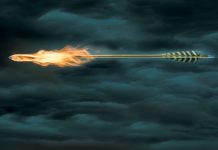 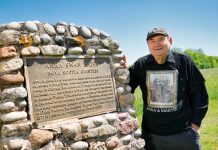 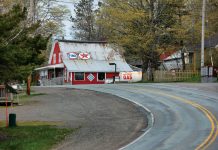 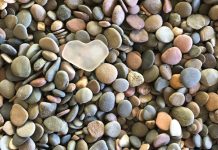 The Mystical World of Sea Glass